Creating a Folder Structure for Your Plain Text Files

Not matter what you’re doing, the mass of your text files can quickly get out of control. You have dozens (or more than dozens) of files dumped in one location on your computer. And finding the one or more that you need files becomes more of a chore than it has to be.

That’s where folders come in. As you probably know, a folder is just a directory on your computer. It holds files — no matter what type — that are somehow related. If, for example, you publish a blog, you can create a folder named after that blog to keep track of your draft posts.

Folders keep your files organized and make it easier to find. In the next several hundred words, I’m going to share some tips that can help you effectively use folders to organize your text files.

I’m not going to show you how to do that. That’s basic computing, no matter what operating system (desktop or mobile) that you use.

When you create folders, give them descriptive, meaningful names. A name that will easily identify the contents of that folder.

Let’s say you’ve embraced plain text for writing. Using a name like My Writing or Writing Notes for your work isn’t the best way to go. By doing that, you’re just shovelling the mess that’s your files into another place. Sure, the mess might be smaller but it’s still a mess.

Instead, you can create folders named after the publications to which you regularly contribute. Or create folders for your projects — for example, if you’re writing an ebook, name the folder using the book’s title. While you might have a large number of folders, you’ll be able to quickly zero in on your work.

A paragraph or two ago, I mentioned that using a name like My Writing or Writing Notes for your folders isn’t the best way to go. Well, that’s not always the case. You can use sub folders to even further organize your writing.

Let’s say that you decide to create a folder called My Writing. Under that folder, you can have separate sub folders for each publication that you write for, a folder for drafts, and another folder for notes.

You can create as many sub folders as you need. You can even add folders to sub folders — do that and you wind up with what techie types call a folder structure. Think of the folder structure as a tree. The main folder is the trunk, and the sub folders are the branches and leaves that are connected to that trunk.

As I’ve stressed earlier in this article, one of the keys to using folders effectively is to give them descriptive, meaningful names. Another key is to create an effective folder structure.

I’ve found that the most effective folder structures are project-based and task-based. Let’s take a look at both of those structures.

A project-based directory structure is for a specific, one-time project. That could be a writing assignment you’re doing for a corporate client or it could be for a book that you’re writing.

Depending on the project, you might have sub folders for images, notes, and the like. Let’s say you’re writing a book. You’d have a main project folder, with a sub folder for drafts of each chapter, another for files that have been edited, and one for the final approved drafts.

Here’s an example of a project-based folder structure:

Here’s an example of a task-based folder structure: 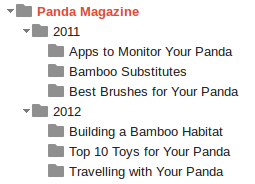 Setting up a folder structure to manage and organize your text files requires a bit of work upfront. Once you get into the habit of creating and using your folder structures, you’ll find they help make it a lot easier to manage your files