Taking a Look at Simplenote

As someone who writes for a living, I take a lot of notes. And while I still use a paper notebook, all of my notes eventually go digital. Standard Notes, as you probably know, is my note-taking application of choice. An old favourite, though, is Simplenote.

Simplenote fits with my philosophy that a tool should be simple, and simple to use. And if it’s plain text, that’s a bonus. Simplenote meets those requirements. It’s one of the web-based applications that I regularly recommend to people even though I haven’t used it for several years.

As its name says, Simplenote is simple. It’s easy to use. There’s nothing to set up. You log in and start typing. 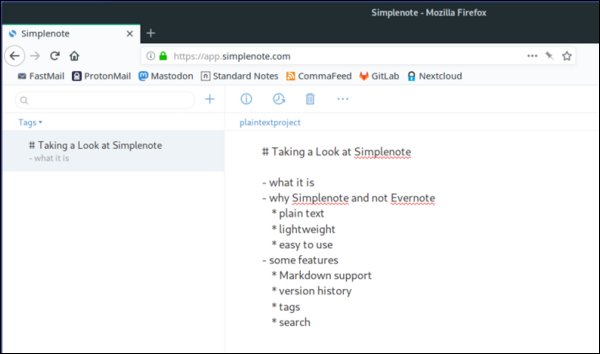 And it’s that ease of note taking that’s appealing. It’s just you and your words. Or the URLs you’re copying. Or anything else that you put into Simplenote using its web-based interface, its desktop tool, or the mobile app. More on these in a moment.

Some people I know are put off by not being able to create folders and subfolders within Simplenote to better organize their notes. That’s not really an problem in my eyes, partly because Simplenote has a better-than-average search engine and partly because you can tag your notes. Tags are keywords that you attach to your notes. For example, say I come up with an idea for an article on this site. I type the note and then tag it with the keyword plaintextproject.

So what does that do? You can choose plaintextproject (or any other tag) from a list of tags and Simplenote displays all the notes that are tagged with that that keyword. Tags narrow down the options in the list of notes. And if the list is too long, I can use Simplenote’s search function to narrow the list down even further. 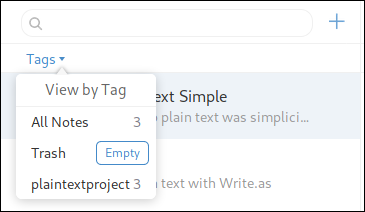 Sometimes, you might write notes or even drafts of articles or posts in Simplenote. Then, you’ll delete something in that note and later decide that you need it again. Well, that something you deleted isn’t gone. Simplenote has a basic revision control feature. It keeps a history of a note, and you can reach back into the past to grab something you might have chopped when you shouldn’t have chopped it.

Finally, and you had to see this one coming, Simplenote supports Markdown. You can edit using Markdown, and preview how a formatted note looks when converted to HTML. 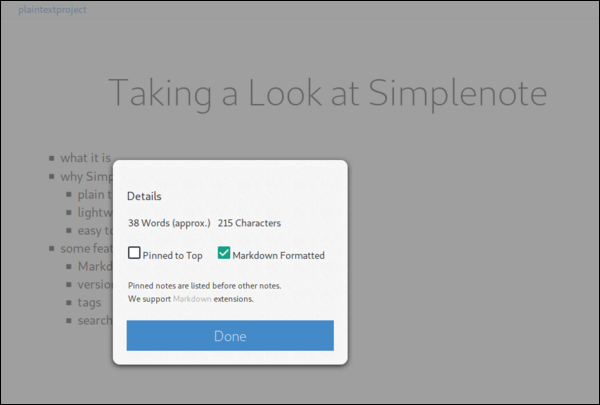 What Simplenote Can’t Do

It’s definitely not as fully-featured as a note-taking tool like, say, Evernote. You can’t organize your notes in folders (which I talked about a few paragraphs ago) or attach files to a note. On top of that, you can’t insert graphics into a note.

I’m sure that there are other limitations that people have run into.

Using Simplenote Outside of a Browser

For some, this could be another limitation: there aren’t that many tools — whether mobile or on your computer — that work with Simplenote. Especially when compared to a service like Evernote.

If you don’t want to use Simplenote’s desktop or mobile apps, there are several alternatives. Here are a couple:

First up, nvALT for Mac desktops, which I discuss in this article. You can set it up to save your notes to Simplenote, and it works quite well as I recall.

There’s also a desktop application called nvpy, which is inspired by nvALT. nvpy isn’t very pretty, but it gets the job done.

Simplenote isn’t for everyone. It doesn’t pack the features some people use or think they need. For others, it’s more than enough. Simplenote can fit quite nicely into a plain text workflow. You can’t ask for much more.