All of my work is done on computers and devices running Linux, Chrome OS, and Android. I’m comfortable with those operating system, they don’t get in my way, and they let me do what I need to do.

However, every so often I work for an employer or a client where the MacBook is the office workstation. I’m not (and have never been) an Apple fanboy. Nothing in Mac OS is anything I haven’t seen before. And, to be honest, I don’t really understand all of the fuss. But I have to admit that MacBooks are nice laptops.

If you’ve read this space for any length of time, you know that I try to do as much of my work with Markdown as I can. And I like to sneak it into the office whenever possible. After I got the MacBook, one of the first pieces of software I installed on it was a dedicated Markdown editor.

I did a quick survey of Markdown editors for the Mac and settled on a free editor called Mou. It’s a simple yet very effective editor. Let’s take a quick peek at it.

Mou isn’t much to look at. The interface is very spartan —there are two panes, one where you type and another that generates an HTML preview of what you’ve typed. It reminds me of a web-based Markdown editor called Markable. 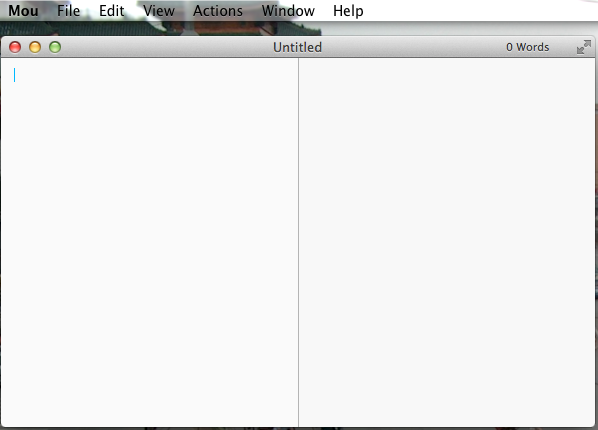 While Mou is somewhat bland looking, you can change its look and feel of the preview by selecting one of several stylesheets that come with Mou. Do that by selecting Mou > Preferences and then clicking the CSS option. You’ll have to play with the settings a bit to find the right look for you.

To be honest, I like Mou’s plain look. Why? It’s functional. There are no buttons or adornments to get in my way. All I need to do is start typing. I can focus on what I need to do, and not on features. Doing that makes me more productive.

Mou isn’t simply a plain text editor. It has a number of useful features. Not so many that they bog the app down, but just enough to make Mou useful. Like what? How about the ability to:

Over the years, I’ve tried a handful of Markdown editors for the Mac. Mou is definitely my favourite out of all of them. It’s easy to use and reminds me of an online Markdown editor called Markable. If minimalism is your thing, then Mou is perfect for writing in Markdown on a Mac.