Using Atom, From a Non-Techie's Perspective

A text editor is an essential tool for living the plain text lifestyle. A good editor lets you work on anything — an article or blog post, a task list, a journal, and more — without getting in your way.

While I’m an Emacs guy, I also see the value of other text editors. One that I particularly like, and have used extensively in the recent past, is Atom.

Developed by the folks at GitHub, Atom is a text editor that’s modern, approachable, yet hackable to the core. Being from the forges of GitHub, Atom is designed for developers. That’s pretty obvious from the moment you start it up.

You might be wondering, though, why does a someone who isn’t a coder like a coder’s editor so much? Well, Atom is a very flexible and useful tool for anyone working in plain text.

As I mentioned earlier, Atom packs a lot of features for coders. When I used Atom exclusively, my primary use for it was writing — articles, blog posts, draft chapters of books, and the like. I ignored anything that didn’t help me do what I need to do.

I just fired up Atom and use started typing. OK, I did use Atom to do some work in HTML or to write the occasional script. That wasn’t my main reason for using the editor.

Sure, you can write using any text editor, no matter how simple or complex it is. Atom, though, does have a few features writers will find useful, especially if those writers work in Markdown. The first of those is a built-in Markdown previewer. Just press CTRL+Shift+M to open a preview tab. 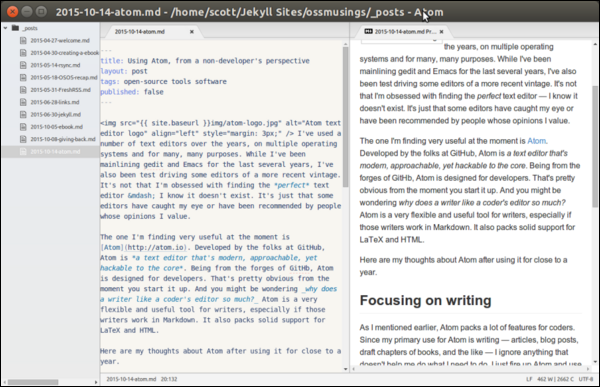 The built-in spelling checker underlines mis-spelled words. To correct them, press CTRL-Shift-: to pop up a list of corrections. 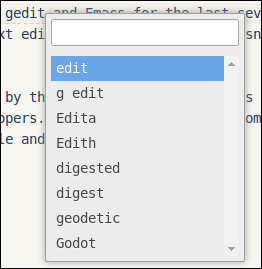 That’s all pretty basic stuff. But what makes Atom really useful to writers? Its packages

The Power of Packages

Packages are Atom’s plugins. They extend the editor’s capabilities. Atom has over 7,500 of them. Obviously, you won’t be using them all. Or even a fraction of them. Here are the ones that I found most useful when writing:

To install a package, select Edit > Preferences and then click Install on the Settings tab.

Type the name of the package you want to install, or some keywords, in the search box and press Enter. When you find the package, click Install. Atom does a ll the work for you. You might have to restart the editor to get a package to work.

Is Atom for Everyone?

Of course it isn’t. If you expect it to be and are disappointed, then the problem lies with you and not Atom (or anything else). I know writers who won’t be interested in it. I know software developers who aren’t huge fans of it, either. But that’s OK. No one says you have to use, or like, everything that you come across.

While I haven’t used Atom in several years, it did grow on me. I found a good rhythm when I used it. Atom did what I need it to do. That’s really all that matters.