How to Quickly Create and Use a Plain Text Task List

I can’t tell you how many task management applications there are out there. Dozens, if not hundreds. Everything from web-based and desktop to-do lists to mobile apps and probably a whole lot more.

Some of them are really good. Some aren’t. But they all do pretty much the same job. A job that I believe plain text can do just as well as any app or service.

Far too many people, though, discount the humble text file as a way to manage their tasks. But over the years, I’ve learned that you need to be flexible (and not just with your task list), due to either limitations of the technology you have at your fingertips or to circumstances beyond your control.

When your choices are constrained, plain text is a lifesaver. I learned this at a contract gig I had between 2007 and 2010. I was working at a large financial firm which locked down employee desktops — no one could (and I bet still can’t) install any software that wasn’t on the firm’s approved list. Even then, the IT department had to vet and test and then install the software. It was a long, involved process and there was no guarantee the software would be approved.

Then, as now, I liked to keep a list of my daily tasks handy. That list helped keep me on track. The to-do list feature in the company’s email software at the time, Lotus Notes, wasn’t really adequate for doing that. So, I decided to go low tech.

Let me share the technique I used to quickly create and use a plain-text daily task list with you.

Since I couldn’t install any software on the computer I was using, I had to use what was at hand. The computers at the office ran Windows (which I don’t normally use if I can help it) so I was stuck with Windows Notepad. While Windows Notepad is a pretty lame text editor, it was more than adequate for what I needed to do. And that was creating a text file called tasks.txt.

I updated that text file the end of each day. The file listed the task that I planned to complete, along with a status for each task — either Done or In Progress. I also included a set of goals for the current week in the file.

At the end of each day, I got rid of the items that I’d finished and moved anything else forward.

Remember that I did come up with that technique almost a decade ago. Since then, I’ve refined the technique. It’s still simple, but it now gives me a little more flexibility.

That text file still contains the week’s overall goals, but I break my tasks down by day in the file. Here’s an example: 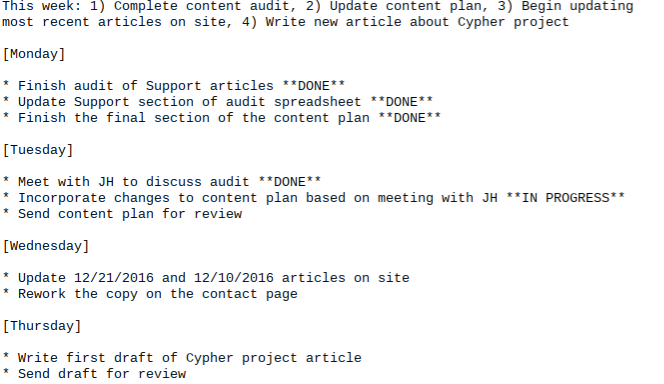 When I was a freelance technology coach, I worked with a few people who were interested in adopting the technique I’ve been discussing. All of them said they prefer a daily list because a daily list gives them more focus.

You can easily apply the principles behind the technique to a daily task list. You’ll need to think about how to name and organize your files — for example, create a folder for each week or each month and save all of your tasks lists files in there. Of course, you’ll need to name the files for the days to which they apply — for example, tasks-20180116.txt for task that you need to complete on 16 January, 2018.

Instead of a weekly goal, put a daily goal at the top of the file. Then, add your tasks. Here’s an example:

If you have one or more tasks that you don’t complete, just move them to the next day’s list.

Helping You Get Going

I’ve created a pair of templates:

Feel free to download and use or modify them. Like my other templates, I’ve released the templates under a CC0 public domain license that lets you do anything you want with the files.

Using this technique enables me to focus on the tasks I need to complete for a client or job, and not worry about mixing things up with my personal task lists.

That said, some of the people I’ve taught this technique to have used it both at work and at home. It’s simple and it’s flexible. Best of all, it doesn’t require you to use or learn any new software. Everything you need is at your fingertips, no matter what device or operating system or text editor that you use.